On November 21, 2009, I reported a battery life problem for my 2007 Apple Aluminum Bluetooth keyboard that had arisen after the installation of the firmware required by the new Apple Magic Mouse. After going through three sets of AA batteries, I had determined to turn the keyboard OFF when not in use. This solution soon grew into such a hassle that I went to the ultimate sacrifice of removing the aluminum keyboard from use and returning to a wired keyboard.

On January 28th, Apple posted a firmware update for the keyboard (Version 1.1) which purports to solve the battery issue. I have retrieved the keyboard from it’s exile and once again placed it in service. It is too early yet to claim success or failure, but preliminary monitoring of battery levels appear promising.

It looks promising. Originally, I would be replacing a set of batteries by now. Currently, the battery level on my keyboard has dropped by 4%. Extrapolation would indicate approximately 25 weeks of battery like, but it is unlikely that the batteries will degrade in a linear fashion.

I believe I can declare a fix. The keyboard battery level is still hanging in there with many weeks of life still left in the original battery set.

I was hoping that Apple  (Steve Jobs) would resurrect the iBook moniker as the name of the new Apple Tablet, but this was not to be. Apple did, however, revive the use of the name for the eBook feature to be rolled out with the device. A few crumbs to be thankful for.

OK, let’s get past the obvious rolling of the eyes and hushed snickers that “iPad” bring to mind (Thanks Madd TV) and move onto my first impressions.

Will I buy one? My heart says yes, but my tech mind asks “What about version 2?” for hardware updates such as the camera. The next major OS update (OS 4.0?) will certainly influence me.

Who am I kidding? Heart, let’s me and you go down to the Apple Store. 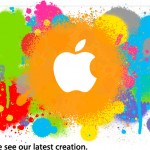 Apple will remove the paint splotches and unveil the product (s) that have fueled the flames of speculation for months.

The question remains, can Apple possibly live up to the hype that has been growing to what seems to be an unattainable level.

A number of rumors have settled on 4 basic items.

After the Tablet, one of the other three might make the “one more thing” category, but I believe the show will center around the Tablet and the Tablet OS.

As Paul Harvey used to proclaim…”Stand by for News!”.

News & Views from My World of Apple