My new iPad arrived at 12:23 PM on Friday, March 16th. The FedEx driver laughed when he reported that this was the first delivery he had made where the customer wasn’t waiting outside for him. At our house, he had to actually ring the doorbell to get us to the door.

After setting up the new iPad from my latest iPad 2 backup, I immediately noticed the difference in screen resolution. Text was incredibly sharp on the new device. I also notice a marked increase in performance for such things as zooming the screen in and out (I rely heavily on Accessibility Options).

I next logged into the AT&T website and updated the cellular device data to move my unlimited Plan from the old iPad  2 to the new iPad. This was done without a hitch.

On Saturday, I actually took the new iPad on the road for a test of the LTE connection. Orlando is one of the lucky locations in which AT&T has LTE service.

To say the least, I was nicely surprised. Riding down t he  road, I performed a “speed test” and  was blown away by the results. Over 20 Mgps download and over 12 Mbps upload. Later on that afternoon, while manning my usual post at a local mall, I re-ran the test and too a screen capture of the results. Note the LTE logo at the upper left of the screen. 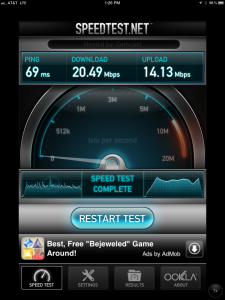 Other than screen resolution and noticeable performance gains, the new iPad was not too different from the iPad 2. A very slight difference in width and a slight, but more noticeable difference in weight.
I was also happy to see that the Apple Smart Cover worked without any problem. Also, I was able to fit a clear candy shall protector on the back. Although manufactured for the iPad 2, the shell, with a little coaxing, snapped into place on the new iPad. The Zagg Folio case provided a similar fit; a little snug, but the iPad slid into place.
While this represents only a limited set of data points, the new iPad appears to be a winner.

As I knew I would, I pressed the “Place Your Order” button at the Apple Store. The new iPad (3rd Generation) has been pre-ordered. The hook that got me was the Retina display. The 4G LTE is nice, but, as an AT&T customer, I am not likely to find the service in my area any time soon. The camera upgrade is welcome. Maybe I’ll take advantage and do more with photos.

I watched the playback of the Apple Announcement. There was a definite “Steve Jobs” influence on Tim Cook. You could close your eyes and imagine Steve walking back and forth across the stage.

Most iPad competitors are honing in on tablet technology that Apple introduced with the 1st generation iPad. Now Apple has moved the tablet bar considerably with the new offering.

I have purchased each version of the iPad so far. With the original iPad, my usage pattern was mostly limited to the consumption side. With the iPad2, I began to use the device more and more for content creation; as an integral part of my day-to-day professional life. With the new iPad, I expect that usage pattern to continue and increase.

Also of note was the release of IOS 5.1. The notes indicate a battery fix. My iPhone 4s certainly hopes so.

Is March 7th the “Day of the iPad”? All indications are that a new iPad version will be announced on Wednesday and be available for purchase shortly thereafter. As always, there is a tremendous amount of rumor masquerading as fact surrounding the announcement. This should be dealt with on Wednesday. The winners and losers will thrash about for some days after. In other words; the same old same old hubbub surrounding an Apple product announcement.

While I am certainly interested in what is announced and when will it be available (I have long since given up the struggle as to buy or not buy), I am also curious how this first major “post Steve Jobs” production will be delivered to the masses. Will there still be the famous “One More Thing” or will the OMT be shelved either in deference to Jobs or by a different presentation style by Tim Cook? Will the old Apple magic still be there without the personna of Jobs? After all, that was a major part of the “magic” we looked forward to.

All will be revealed Grasshopper. Patience.

News & Views from the World of Apple